The State of Legislative Elections in the Middle East and North Africa: A Research Report

·      Legislative Assemblies: A branch of government that generally has the authority to make laws and keep other branches accountable. The formation and roles of a legislative assembly varies by country; whereby in many countries, members are appointed, and their roles are just a formality. It is also worth mentioning that legislative assemblies’ names vary from country to another, including the House of Representatives, People’s National Assembly, the Parliament, the House of Deputies, and the Shura Council, among others.

·      Voting Age: The minimum age established by law that a person must attain before they become eligible to vote. The most common voting age is 18, but some countries require different ages.

·      Candidacy Age: The minimum age at which a person can legally qualify to stand or run for elections or hold certain elected offices.

·      Voter turnout: The percentage of eligible voters who cast a ballot in an election. This is calculated by dividing the number of those who cast ballots over the total number of voting-eligible population (not the total adult population).

·      Youth Voter Turnout: The percentage of youth eligible voters who cast a ballot in an election. This is calculated by dividing the number of young people under 30, who cast ballots, divided over the total number of voting-eligible population.

For this research, we relied on raw data produced by the Inter-Parliamentary Union (IPU), the World Values Survey Wave 7, the Arab Barometer Wave V, and the Afro-Barometer Wave 7.

Looking at the difference between voting age and candidacy age, we find that 14 of 21 countries in the region adhere to universal suffrage, placing the minimum age legally required to vote at 18 calendar years, culminating into an average of 18.67 years. Additionally, 7 different countries adopted different internal laws stipulating other ages. For example, Iran chose the minimum legal age required at 15 (as the lowest minimum age required in the region); Sudan selected 17; Bahrain selected 20; Kuwait, Lebanon, and Oman require 21 years of age; and the UAE require 25 years of age as the highest minimum age required in the region.

As for the minimum legal age required for citizens to stand for or run for legislative elections, also known as candidacy age, we found that Morocco and Tunisia stipulate the lowest age in the region with 23 years of age while Sudan has the highest candidacy age of 40. Further, 9 different countries selected 25 as the most common minimum age required to run for legislative elections. These countries are Algeria, Egypt, Lebanon, Libya, Mauritania, Syria, Turkey, UAE, and Yemen. Additionally, Bahrain, Iraq, Iran, Jordan, Kuwait, Oman, and Qatar require 30, as Palestine selected 28, albeit the last legislative elections they had was back in 2006. Overall, the average candidacy age in the region was found to be 27.57. 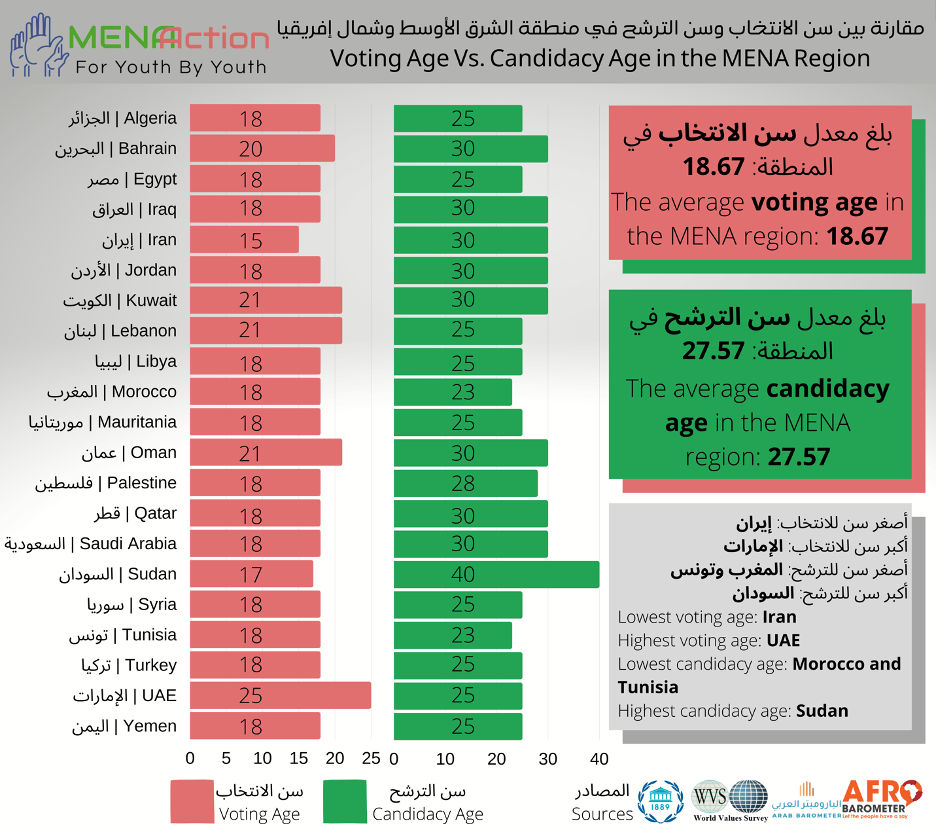 We, then, looked at the voter turnout rates for the most recent legislative elections in each country. As indicated earlier, voter turnout is the percentage of eligible voters who voted in an election. The percentage is calculated by dividing the number of those who voted (without any violations) over the total voting-eligible population (not to be mistaken with the total adult population). There are a number of factors we did not delve into in this research, such as voting laws, registration laws, and whether voting is compulsory or not.

There a number of factors impacting voter turnout. These factors include electoral competitiveness, confidence in elections, electoral laws, registration process, and the socioeconomic status of the voter. Meaning, if elections are held on a weekday, voters who are not well-off may not afford asking their employers for a day off. Additionally, voting stations may not be easily accessible to everyone. Furthermore, we found low levels of confidence in both the electoral process and in legislative councils across the MENA region, whereby 50% indicated that they did not trust their national parliaments at all, coupled with 24.9% who indicated they did not trust their national parliaments that much, compared with 37.5% and 26.8%, respectively, for elections, according to the World Values Survey.

Youth Voter Turnout for the Most Recent Legislative Elections

Looking more specifically at youth voter turnout for the most recent legislative elections across the region, we found that data was not easily available. Essentially, most source were abstract and did not include any figures, instead, they only indicated whether it was higher or lower than the national average. With that, we relied on scientific public opinion polling while acknowledging a ±2.5% margin of error. The figures indicated below refer to the percentages of young voting-eligible population who indicated they voted in their country’s most recent legislative elections. It is also worth mentioning that there was not any data available for Mauritania, Oman, Saudi Arabia, or Syria.

Percentage of Women in Legislative Councils