The Middle East and North Africa region boasts populations whose pride in their nations remains at a high level. The region also enjoys a youth cohort with tremendous energy, entrepreneurship, and endurance, which otherwise is unfortunately and mistakenly labeled as “the youth bulge”. Such a cohort has worked tirelessly to improve their livelihoods and the conditions of their respective countries, whether in the form of collective activism or individual work. In this report, we sought to explore the relations between nationalism or national pride and youth’s tendency to admit to the existence of an issue and in turn, reform or change.

For this research, we examined data gathered by the World Values Survey, the Arab Barometer, the Afro Barometer, and the Arab Center. The data examined reflects a youth cohort of the individual countries, aged 18-30, as part of nationally representative samples. In examining the data, we further curated them on a scale of 1 to 4, whereby 1 was the lowest and 4 was the highest on the scale:

Public confidence or trust was defined as inclusive of two types. The first type delved into people’s attachment to country symbols as the level of belonging to their individual states, which can be labeled as diffuse support. The second type reflects public trust or confidence in the performance of public institutions in meeting their objectives.

In order to further prove, disprove, or refine the hypotheses made in this report, an in-depth research with more detailed and specific questions and to cross-examine such data to better understand how youth’s willingness to acknowledge the existence of issues and need for change varies with the level of their national pride. Such a research can also be accompanied by an observatory study of engaging youth of different nationalities in discussion with one another and contrasting their attitudes when discussion groups feature different nationalities, which arguably can stimulate nationalism. Nevertheless, this report looks to start a discussion on this matter and engage with young people in the region in a conversation about reform.

Looking at individual countries’ youth populations’ trust levels revealed interesting findings. The individual scores of diffused trust and performance-specific confidence were aggregated under composite scores for each category. The first category included indicators such as national pride level, trust in the armed forces, affinity with the nation, and willingness to fight for country, among others. The second category included an evaluation of the performance of the governments, the legislative councils, the judiciary, the healthcare system, the educational system, among others.

As for Kuwaiti youth, their diffuse trust stood at 3.28, compared to their 2.18 performance-specific trust. Lebanese youth’s pride level with slightly higher than Kuwait’s with 3.35, but it was lower in terms of specific trust with 1.88, with a 1.47 difference between the two categories.

Libyan and Mauritanian youth scored very similar diffuse trust levels with 3.24 and 3.29, respectively, compared to a 1.72 and 1.96 performance-specific confidence levels, with Mauritanian youth illustrating some moderate levels of confidence, especially in terms of civil service. Moroccan and Mauritanian youth boasted identical levels of diffuse trust with 3.32, but Oman’s public confidence in the performance of institution higher than Morocco’s with 2.67 compared to 1.69 for the later, mostly due to Omani youth’s satisfaction with its healthcare services. Data for Palestinian youth was harder to find, given their circumstances. Their diffuse trust stood at 2.92, as the second lowest in the region, while their performance-specific confidence appeared exactly in the middle of the scale with 2. Qatari youth indicated the highest levels of confidence in both categories with 3.87 diffused trust and 3.55 for the second category, due to their high satisfaction with civil service, judiciary, and even the government.

Saudi Arabian youth showed similar patterns to that of Qatar, with a 3.69 diffused trust level, compared to a 3.03 performance specific trust. It is also worth noting that such a number might have been higher if it were not for moderate confidence in labor unions. Sudanese youth’s diffuse trust stood at 3.06, contrasted with a 2.01 performance-specific trust levels, as its government, elections, political parties, and parliament all evaluated under 2 points. Similar to Palestine, data for Syria was somewhat difficult to gather, so we relied on slightly older data. Nevertheless, Syrian youth indicated a diffuse trust level of 2.88, compared to a 1.55 performance-specific confidence, which was the lowest among the countries studied, with a notable 0.93 confidence level in civil services. 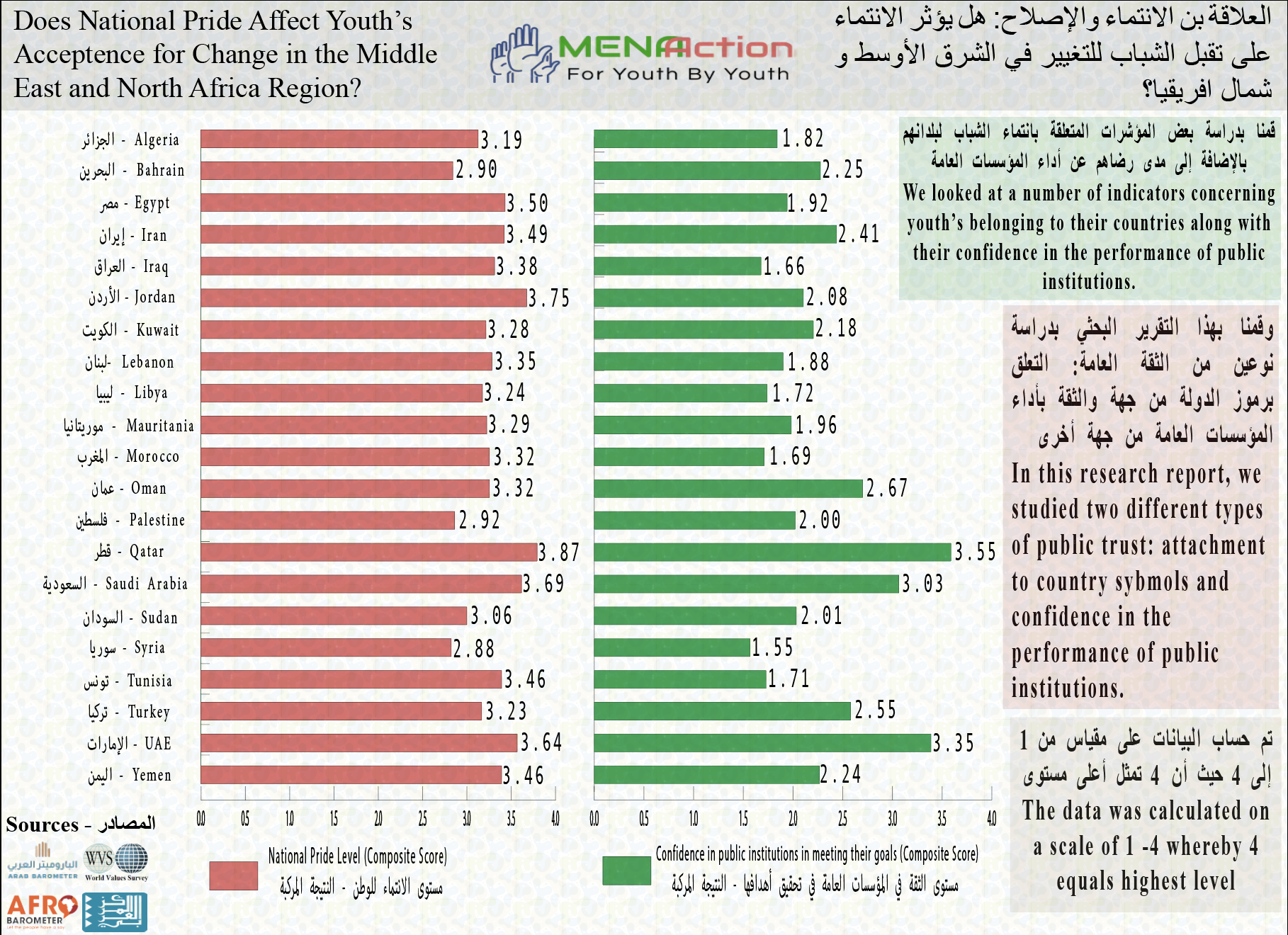 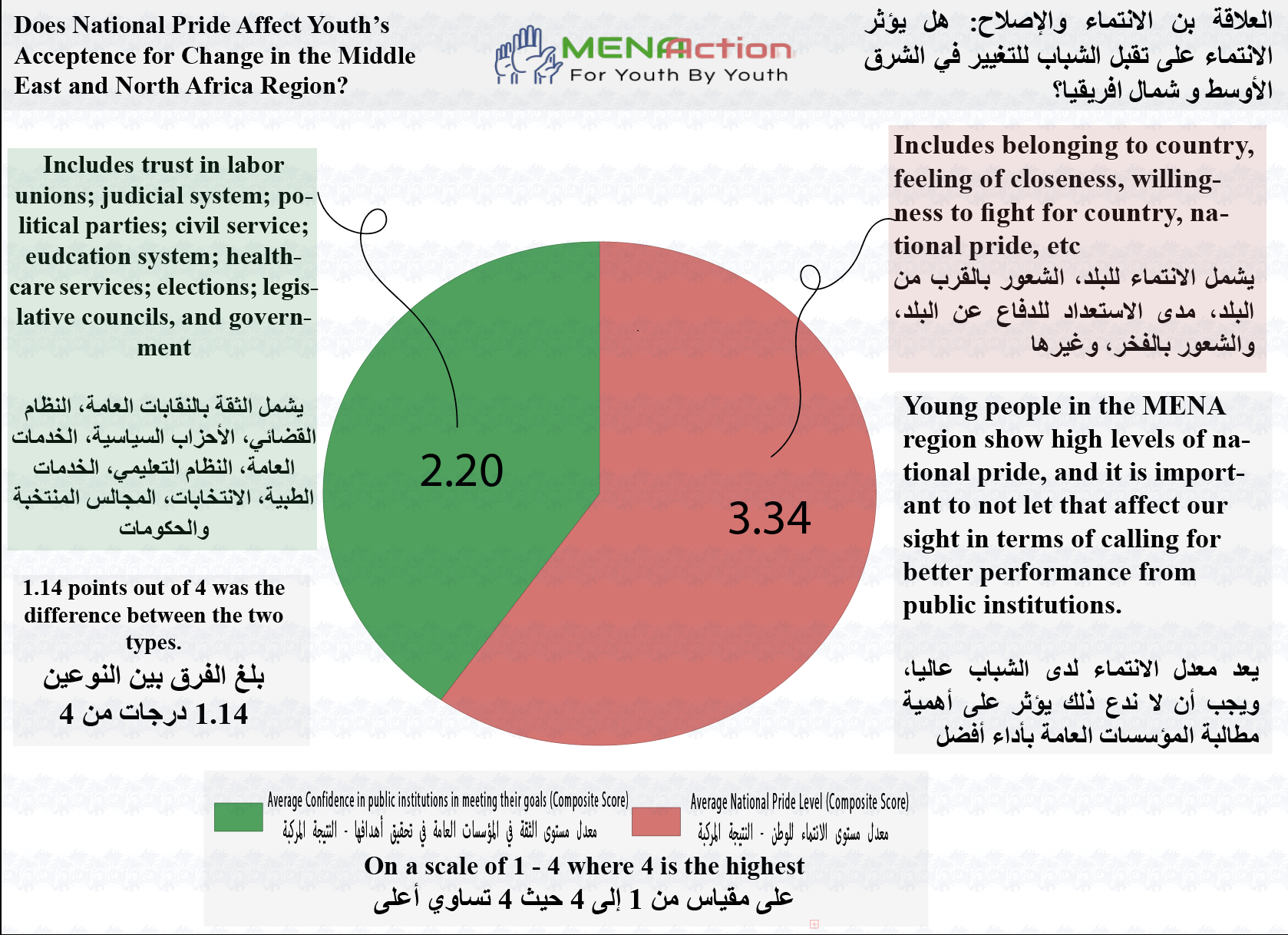 In short, the Gulf sub-region’s highest levels were divided between national pride and confidence in the military while their lowest scoring indicators were labor unions, followed by educational systems.

The sub-regional brief analysis shows that national pride and national affinity were the highest scoring single indicators and notably higher than youth’s confidence in public institutions. In fact, the institutions which received the lowest performance evaluation were civil service, labor unions, elections, political parties, and healthcare services. Such poor evaluation is consistent to the major challenges facing people in the MENA region. With the COVID-19 global pandemic persisting, the three main and recurring challenges can be grouped under (1) economic challenges, including unemployment, price hikes, poverty, and deteriorating livelihoods; (2) government performance in terms of weak public services including health, education, and transportation, coupled with financial and administrative corruption; and (3) security related challenges including safety and political stability. The fact that these challenges continue to linger and remain under-addressed explains the low evaluation public institutions in meeting their objectives.

The main take-aways of this brief report shows that young people in the MENA region boast high levels of pride in and belonging to their respective nations. But their confidence in public institutions in addressing their needs and meeting their objectives remains low, specifically, about 1.14 points out of 4, lower than their average diffuse trust levels. While the gap is clear, a tendency to overlook, downplay, deprioritize, or even ignore the challenges we face remains a trend in the region.

In an attempt to explain this discrepancy, there are three main arguments in mainstream political literature. The first argument states that people’s national affinity or national pride would heighten when their countries are compared to others, propelling them to defend their countries’ shortcomings. The second argument entails that people’s national identity, and by proxy national pride, heightens when their countries face security-related challenges. This bears resemblance to the “security-human rights” debate, for which human rights is believed to take a backseat to safety and security. The third hypothesis indicates that governments have, in one shape or form, implanted the idea that criticizing government performance automatically means criticizing the country, and in turn reflects negatively on one’s patriotism or love for nation, and even means “defection”.